Welcome to the Smolderforge Support Community! Go ahead and register a new account or login to a current one already made. Please post in the correct forums and be kind and respectful to others!

Talk about anything here, related to Smolderforge or not.
Locked
80 posts 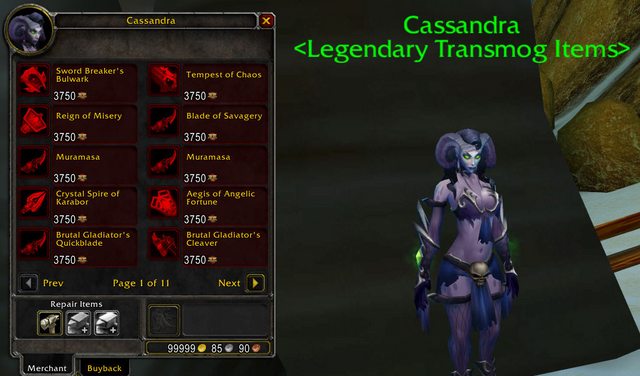 Our new vendor, Cassandra has just been released but we still have to design a system to redistribute our brand new items among non-arena players community as this vendor is currently for arena only. We would love to see some feedback from PvE and Battleground communities and your suggestions concerning the way the weapons should be implemented and obtained. Some important notes to keep in mind:

- Legendary weapons are not supposed to be easy to obtain
- We want to make players work towards objectives and discourage them from collecting kills in the middle of battlegrounds instead of working towards goals.
- Players shouldn't be able to buy their weapons immediately after implementing the system (which was unfortunately done with arena rewards due to the unexpected delay).

One of the problems is that setting the prices gets complicated because of how prices work. Item's cost has to be determined by ID number set by Blizzard making which makes designing custom systems more complicated, we have to use currencies which were originally set by Blizzard. For those interetested HERE is the list of prices (ID numbers higher than 2570 are not available in 2.4.3).

Here are 3 items worth mentioning which could be used to make tokens for legendary items:

All three can be used to form 1x token prices and are not crucial in our gear system. The chosen one would be wiped from all characters and the way of obtaining it would be adjusted to the legendary weapons.

One of the possibilities could be awarding players who complete their daily battleground quest with some kind of item. When a player reaches a particular number of tokens it is possible to turn them to a special questgiver and be rewarded with the legendary weapon currency. This way would force PvP players to complete their daily battleground quests and fight for the objective. If we take into account that there are just 4 PvP daily quests we exclude the possibility to get the reward in a short period of time and also make it more suitable for those players who do not have all day to play the game.

What do you think? What is your suggestion? Help us to design a suitable system of legendary weapons redistribution!
Game Master - In-Game Support / Gameplay Development

E-mail: [email protected]
Talk to us on discord!
discord.smolderforge.com
Top

First of all, I think that many transmog models aren't available for every weapon of the same type. We can get this example with the staves.
Moreover, I also think that many weapons aren't that legendary, staves again : The one looking like the Draenic Wildstaff.
Adding Will of Arlokk is an error imo, as it's not something really hard to farm, even if I can understand that many players are lazy to do it.

Mark of the Illidari seems to be the best thing to use here, as far as it's an option with event rewards.
The 2 others are already used for something really specific and people used to farm them a lot, I guess that I'm not the only one with plenty of them in banks/gbanks.

Well, there are two ways tokens can be obtained for the PvE community.

1. Through a quest chain (E.g. Black Temple attunement quest chain)
2. Make one random token out of the three drop from each boss, lets say BT or SC for example. I'd suggest BT since its very challenging for the community here, well everything is tbh. Anyway its up to the community/GMs to decide.

I'd also suggest that we use all three tokens for option 2, by making one random token drop out of the three mentioned tokens, per boss. This will make it hard to collect since only one person out a 25/10man raid can have one kind of token per boss. And a player has to collect all three tokens to form 1 legendary item token. And if anyone thinks this is too hard, make it drop directly from the bosses.

And the quest reward can be the legendary token. Only if the quest includes bosses from different instances or something like that (what I mean is it should be slightly harder & take longer to complete)

This is only my suggestion to enable the PvE community get the tokens. I'd like to see what others think about this too. :D
Cheers.
Top

Yes, weapons will have to be improved with the help of our community and its suggestions.

Personally I think Mark of Illidari and Coilfang Armament could make the finest tokens. Changing name or quality of an item is really easy but modifying the icon on the other hand can be tricky. You basically can put another display ID but the icon of item stored in your bags will not change since it is bound to the ID. Mark of the Illidari looks like something what could drop in Black Temple for example, making it perfect token to be used for PvE purposes. Coilfang Armament looks like some weapon fragment which obviously could be used as a token for our legendary weapons. Using those 2 instead of Glowcap would eliminate the problem of players wondering why they have to collect mushrooms to get their Thunderfury or Warglaive.

There is no need to use all 3 tokens for the PvE purposes. You need just 1 token to make it work, it has to be the currency for PvE legendary vendor. Those boss drops you are talking about can be custom made with our own custom ID number, although the item's icon would be a question mark. We could also make just one vendor using one currency, making the way of obtaining the token different for PvE and BG players.
Game Master - In-Game Support / Gameplay Development

E-mail: [email protected]
Talk to us on discord!
discord.smolderforge.com
Top War is in our hearts. The sound of thunder clashing upon the battlefields ,the whispers of those who fought and died beside us forever trembling in our ears. The sands of time have demolished our heroes ,but there are some who still live ...lost and forgotten . But be warned soldier , for what you will unlock behind these doors of the past may never be sealed again....

Description: Blood gathered from our ancestors who fought in these battlegrounds 30 000 years ago.
Stacks:250

Blood Of Heroes will be awarded to every player who completes daily battleground or PvE /Dungeon quests. The rewards can range from 1 to 10 depending on the difficulty of each daily quest.For example ,the Warsong Gulch Flag daily quest can reward with one BloodOf Heroes. The 10 Marks of Honor quest can reward 5 and the daily battleground win can reward 3. For PvE ,completing a heroic dungeon daily quest can reward 10 . For the rest of the PvE quests in Hyjal / Azshara and Quel'Danas it can vary from 1 to 5. These Items will be given from the Battlemasters and PvE Quest givers themselves along with the other rewards that they already do . Upon gaining even one of these ''Blood Of Heroes'' a new quest will become available.


The Red Ronin (tittle) - name not given yet 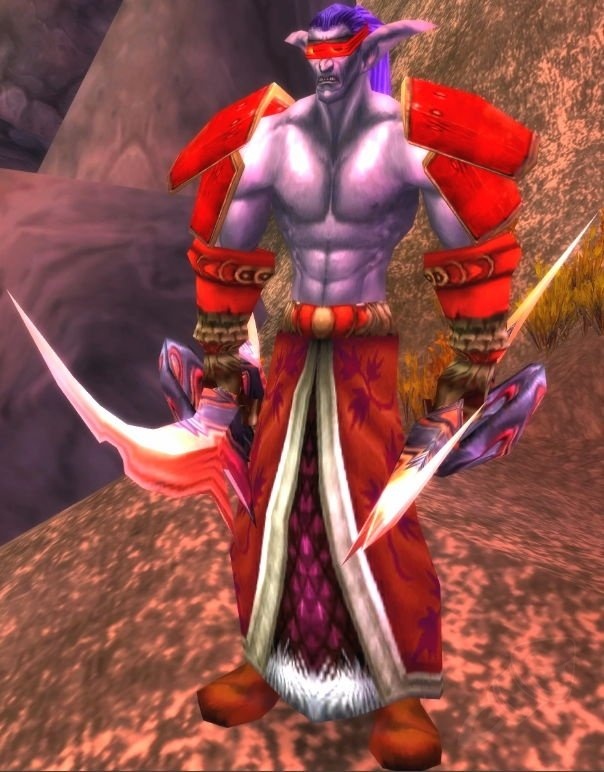 Standing on one of the Tanaris islands ,The Red Ronin will give players a quest the moment they receive even one bottle of Blood Of Heroes asking them to obtain 250 of them and talk to him when they're ready.

Quest Name : The Path Of Blood

Rewards : After collecting 250 '' Blood Of Heroes '' players will be rewarded with :

Description: You can still see the tears slowly melting the inside of the gemstone...

Upon receiving the first out of 10 needed Ruby Gemstones , The Red Ronin will give you your second quest asking you to obtain 10 of these gemstones from blood of heroes.

Quest Name : Forging The Past

After receiving one Red-Blood Ruby Gemstone , The Red Ronin will ask you to obtain a few items for him along with 9 more Ruby .

Rewards: 500 Repution with each battleground faction and Isle Of Quel' Danas Faction.

Medallion Of The Forgotten Champion

Description: Once worn by a great hero who fought in the wars of Draenor 30 000 years ago ...

After receiving the medallion ,The Red Ronin ( suggest names if you like the plot so far ) asks you to find the champion of the past who still wonders the isles of Tanaris. This is the final quest of this quest chain and upon completing it players will be able to obtain one legendary transmog item in exchange for the medallion .

The Forgotten Champion (tittle) - no name yet 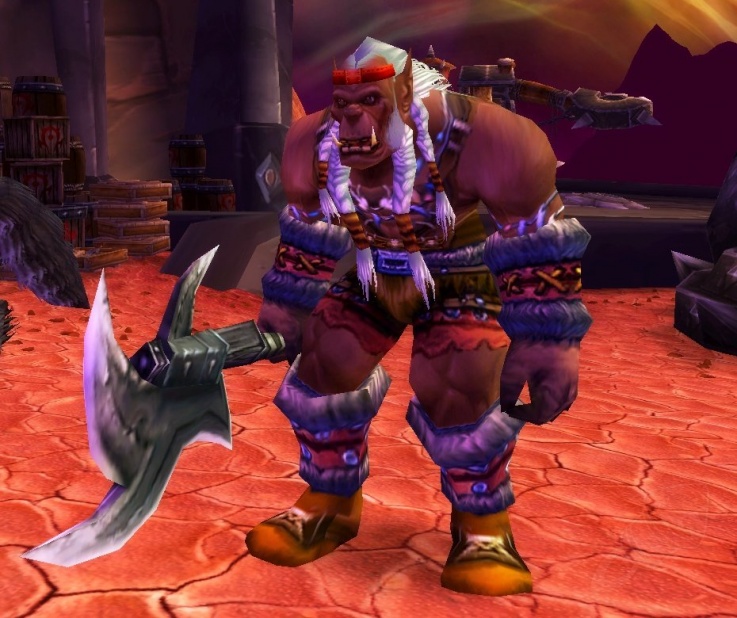 Once players have obtained the medallion , they'll complete the final quest given by the Red Ronin leading them to The Forgotten Champion who will then work as a vendor ,allowing you to trade the medallion for one legendary transmog item just like the normal transmog npc works only when you have a token in your bag.
Check Out My YouTube Channel

Can someone please play on my warrior and get these swords? 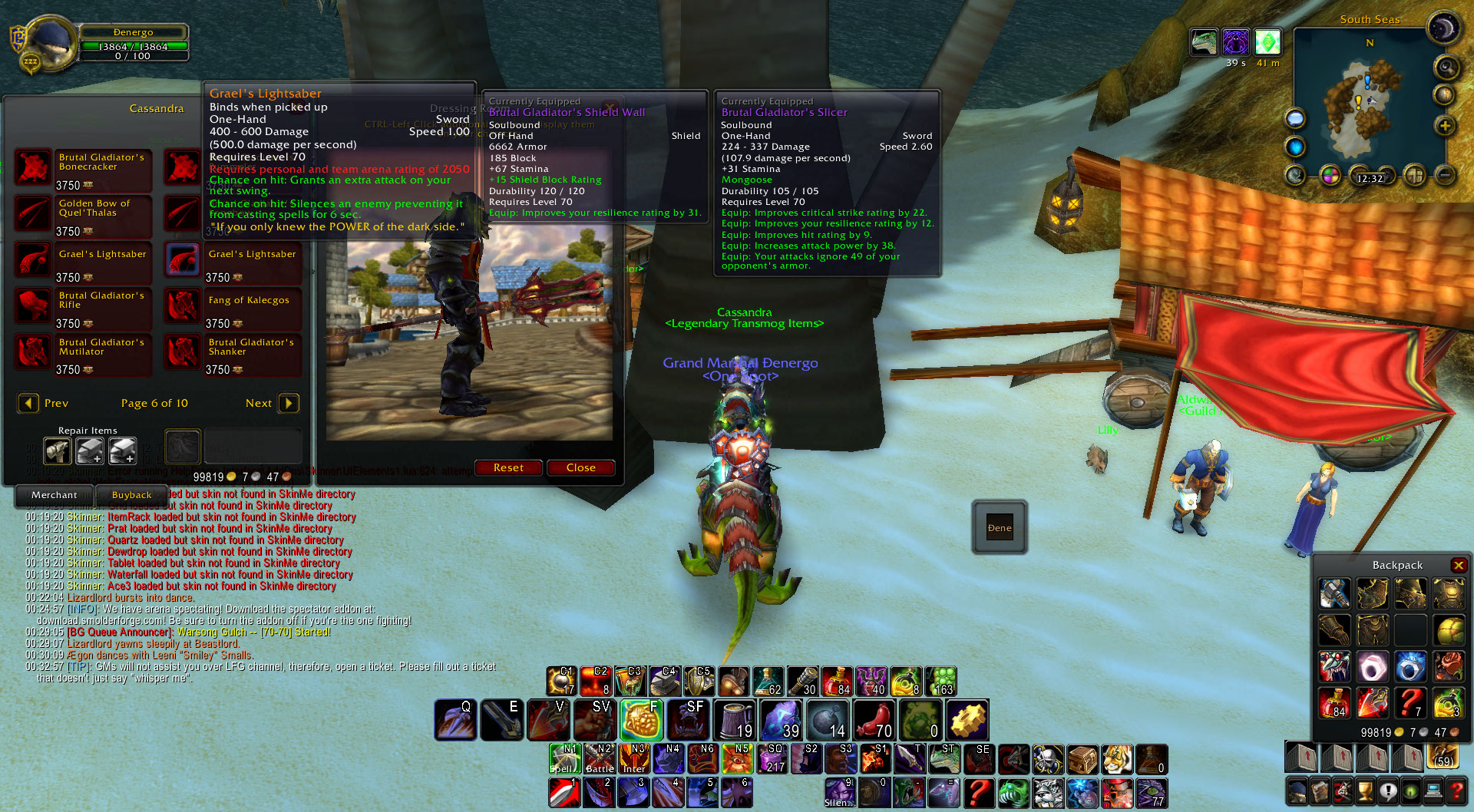 Denergo wrote:Can someone please play on my warrior and get these swords?

Make it with a lot budges of justice about 500 that all can obtain.
Top

Using PBWoW style & extension. All trademarks referenced herein are the properties of their respective owners.